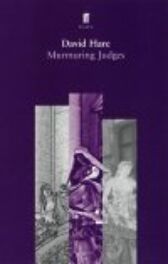 Large Mixed Cast
A young lawyer's involvement in her first case leads her through a criminal justice system - police, courts and prisons - which is cracking at the seams.

Murmuring Judges is the second play in David Hare's highly acclaimed trilogy about British institutions. Racing Demon, which won four awards as Play of the Year in 1990, was the first part of the trilogy and examined the Church. The Absence of War, a play about the Labour Party, completed the trilogy