Murder At The Midnight Hour - An Interactive Murder Mystery Game 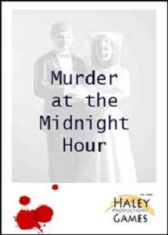 Mr Henry Hogget & Mrs Abigail Windsor cordially invite you to attend the midnight wedding of Jewel Opal Hogget To Roger Quinton Windsor On December 31st, 1969 (you can change the year if you want)

Weddings are usually such happy occasions

But this one will be deadly ...

THERE ARE 6 PRIMARY SUSPECTS (these are the folks who will have full knowledge of the mystery; you'll give them a complete script):

Jewel Hogget: The bride and daddy's little girl. Having been raised by only her dad, she'd do anything for him.

Henry Hogget: The father of the bride. First, he lost his beloved pig farm in Boar's Tush, Alabama and then he lost his wife, Pearl and has had to raise Jewel all by himself. And now he has to give his daughter's hand in marriage to revolting Roger

Abigail Windsor: Roger's mommy dearest, a snobby socialite who is appalled at the thought of her son marrying a pig farming, garbage man's hippie daughter.

Gregg Pierson, IV: Roger's best man. He's very competitive with Roger even though they've been best friends since they were boys

Gert Doppleheimer: Henry's widowed sister and a surprise guest this evening. It may be best if you don't mention her to the family - rumor has it she killed Jewel's mother

2.Muffy Tidwater: She's in love with Roger and she will confess her love tonight

3.Manfred: Abigail's chauffeur and manservant (she can order him around all night)

5.Billy Joe Cyprus: The preacher man. Henry's best friend and lover of all things Leary (Tim Leary that is)