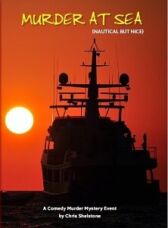 And soon tragedy strikes as he's seen in the water

Accusations fly as to who could have thrown him overboard

Was he thrown or was it an accident?

And was it really the Captain that went overboard?