Much Ado About Nothing - Shortened Version 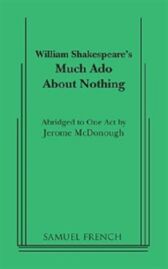 Claudio, Leonato, Don Pedro, and Ursula are the saddened recipients

Only Beatrice, Hero's closest friend, refuses to accept the fabrication and enlists the help of her sometimes suitor, sometimes nemesis, Benedick

Their love battle weaves through the other passions of the play

Order is restored despite the hilarious and oddly-worded meddling of Dogberry and Verges, the inept clowns, uh, constables (these plum comic roles are females in this version)

The wedding day finally arrives, under most unusual circumstances, and Friar Francis (who helped right the wrong) blesses the union of Hero and Claudio

Only Don Pedro seems left out of the joy, and is chided by the formerly sworn woman hater, Benedick - "Prince, thou art sad. Get thee a wife!"