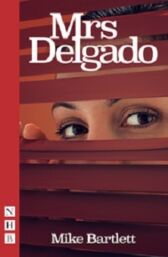 Helen, along with sixty-seven million other people, is in lockdown

Mike Bartlett's funny and poignant play for one actor tells a story of desire, control, raised blinds and lowered boundaries

Mrs Delgado was first performed by Ellen Robertson and directed by Clare Lizzimore in December 2021 at the Old Fire Station, Oxford, where Bartlett's play Snowflake premiered to critical acclaim

This edition also includes the monologue Phoenix, a powerful story of fire and destruction, self-deceit and the corrosion of trust

Phoenix was first performed in 2020 by Bertie Carvel as an audio drama, part of English Touring Theatre and Headlong's Signal Fires storytelling project

'Hilarious... has the gleeful glow of someone returning to what they love. The story and characters tumble out fully formed. The jokes feel effortless, the passion instinctive. It's a heartfelt rallying cry for the importance of community... Mrs Delgado bursts off the page' ~ Guardian

'Riveting... With Bartlett's ability to write characters with such sincere humanity, this 60-minute drama is as bewitching as it is unsettling... exquisitely worded' ~ The Stage