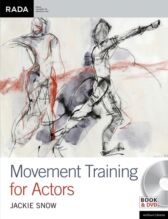 Any actor or teacher, who is devoted to the transformational power of the theatre, will want to return to these pages again and again, finding in them not only the work to be done, but also the inspiration to do it"James Bundy - Dean, Yale School of Drama & Artistic Director, Yale Repertory Theatre

The techniques contained in this book help actors to develop awareness of their own natural posture, walk and rhythm, release the physical imagination and transform into the characters they are portraying, on stage, in film or on television

Part 2: Movements with imagination at the heart of pure movement

A note on Trish Arnold