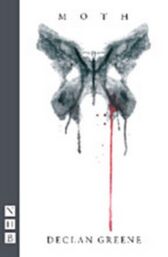 By turns dark and shimmering, Moth is a fast, funny and heartbreaking story about two young people with nowhere to go

Sebastian is "that kid" at high school - he's weird, he smells, he's obsessed with comics, and talks to himself

But after a catastrophic fallout with his only friend, Claryssa, he wakes up with a moth in a jar by his bed, and a calling to save the souls of all humanity

And so begins the Passion of Sebastian: a journey into a terrifying and starless night

By turns dark and shimmering, Moth is a firework of a play offering brilliant scenes and duologues for young actors, exploring themes of friendship, bullying, mental illness and the hierarchy of the school playground

"Exquisite theatre. One of the most accomplished plays of the past few years" ~ Theatrenotes