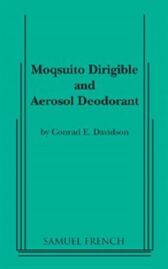 In this one act comedy, Dr. Ballone, a professor of literature, is highly susceptible to suggestion

When he spotted a photograph of the Hindenburg on his classroom wall, he instantly thought he was a dirigible

Mrs. Ballone, who wants her husband back, brings him to a psychiatrist

During his therapy session, Dr. Ballone undergoes two more transformations: first into a mosquito and then into a can of aerosol deodorant

Unfortunately, the psychiatrist has an obsessive fear ... of mosquitoes