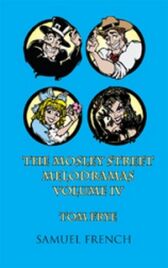 The restaurant business is booming for the Frye family of Rose Hill, Kansas. There's only one problem - well, maybe more than one - the neighbor is crazy and the dog talks!

This wacky famly is facing a treacherous villain, Mr. Sour Kraut, who wants the mortgage, but even more, he wants their beautiful daughter Lendy

Who will save the day?

It seems the answer lies in the hands, er paws of Trixie the dog - hope he's not barking up the wrong tree!

Things can't get much screwier than this tale of woe!

The hero is more like a heroine and vice versa

Our female villain is also masquerading as ... well, a villain

The children run wild, the teacher runs for his life and school superintendent runs everyone crazy, and everyone is bored of education

A real gender bender that's not so tender set in Wachita, Kansas

Alaska is known for gold and adventure and this story has more adventure than you can shake a prospector at!

A bartender named Sam de Milo with no arms, a branded woman, a Canadian Mountie, a drunken housekeeper and a villain who has a heart as cold as an Eskimo's igloo

When one of America's last farms is in danger of being taken over by a large poultry processing company, our hero, John Deere, is taken in under the spell of a company vamp named Holotta Trouble

This farm epic pits the little farmer against Chick Liesome, owner of Liesome products and it gives new meaning to Farm Aid

Set in Independence, Kansas, the fireworks never stop in this bang-up comedy of farm follies