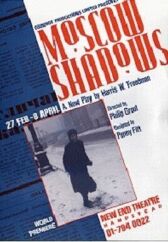 Two widows of the Soviet system have been close friends and neighbours for more than 40 years...

Natasha is disillusioned and cynical

Natasha is a blackmarketeer, selling ikons for dollars, which is a capital offence

Then their neighbour is murdered

And the ensuing police investigation brings unexpected and tragic consequences

"Moscow Shadows is a rich mix, combining the loss of innocence, the all-pervading atmosphere of insecurity ... the thrills and skills of black-marketeering, and a detective story" ~Jewish Chronicle, London

"The play's observations could not be more politically apposite..." The Independent, London

" ... two splendidly meaty (female) parts ... fine and funny performances ... a play rich with humour as well as pathos" ~ What's On In London

"...a drawing-room comedy that ... goes for (and gets) the laugh to be found in a fond portrayal of Jewish matriarchy" ~ The Independent, London