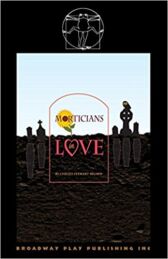 Which is enlivened by two amorous morticians

And a couple of really attractive corpses

" a morbid, pervy, and very funny farce Sure, it's strange, but strangely touching too" ~ Joe Brown, The Washington Post

"In the midst of death, there is life and love - sacred, profane, unrequited and almost always dysfunctional - in Christi Stewart-Brown's very black, five-character comedy (counting two corpses). Scarcely fare for the squeamish, with its excursions into heterosexual and homosexual couplings among the living and dead, the play nonetheless comes off as a caustic, funny, sharp-eyed and skillfully performed autopsy on the difficulties of love Morticians in Love may be morbid, but it has a heart" ~ Lawrence van Gelder, The New York Times

"What relationship is more tender and romantic than the one between a shy, sensitive female mortuary owner and a handsome, buffed, naked corpse? Christi Stewart-Brown's charmingly morbid comedy is so cheerful and upbeat, you'll hardly believe that you're watching a play about bisexual necrophilia" ~ Paul Birchall, Back Stage West