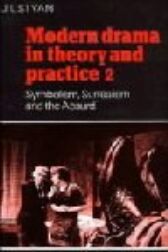 The theories of Wagner and Nietzsche provide the basic principles for this volume, disseminated by the work of Appia and Craig, and affecting the later plays of Ibsen, Maeterlinck, and Lugne-Poe's Theatre de Le'Oeuvre

Jarry is seen as the precursor of surrealism - later symbolist elements are found in the plays of Claudel, Giraudoux, Yeats, Eliot, Lorca and Pirandello and Artaud's theatre of cruelty is related to the work of Peter Brook

The theatre of the absurd is illustrated in Sartre, Beckett, Pinter and Ionesco