Modern Drama in Theory and Practice - Volume ONE - Realism and Naturalism 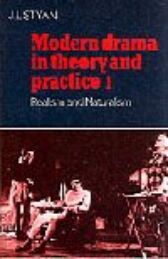 As realism becomes a European movement the account moves from Paris to the Meiningen company and Ibsen's work as producer and play-wright in Oslo, Chekhov's in Moscow, Shaw's in London, Synge's in Dublin

Among the producers are Antoine, Brahm, Grein, Granville-Baker, Nemirovich-Danchenko and Stanislavsky

For the other Volumes in the series, click here