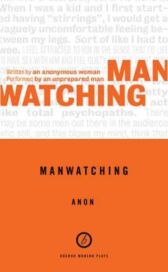 The script is then read out loud, sight unseen, in front of the audience

Commenting on the project the Anonymous female author states:

"I have been thinking about what it means to be objectified, and whether or not that is really tied to desire or power

Although men are objectified by other men, I was at a loss to think of many examples of men being objectified by women, and the examples I could think of were quite complicated - frequently involving the man's profession rather than appearance (in Sex and the City, for example, men are usually referred to in shorthand by whatever job it is they do rather than how they look or act), or their dominance was the source of objectification

Even though many women desire men, the most basic elements of that desire seemed oddly unexplored

So I thought, who better to give the words of a woman desiring men to, than the voice of a man, as it's so much more comfortable and familiar for us to hear about desire through the male perspective?"

"Manwatching has raw emotion in it ... I think everyone should see this play" ~ A Younger Theatre

'Frank and extremely funny ... this theatrical experiment cleverly capsizes the male gaze, skews objectification and probes sexual politics ... confronting the unexpected and articulating details about female sexual fantasy rarely discussed in mainstream culture ... Manwatching is a reclamation of the privilege often afforded to the male voice. The sight-reading element heightens the text's disruptive force there are stumbles and re-runs, double-takes and long pauses. It's fascinating to watch a male comedian getting laughs that aren't really his own here the anonymous woman is the real comic force" ~ The Stage ★★★★

" ... a no-holds-barred confessional monologue detailing one woman's sexual proclivities and desires ... It highlights how used we are to hearing women being described in these terms, and yet how rarely men are openly talked about by women as sex objects. Beneath its frank, chatty, matter-of-fact exterior, Manwatching ponders not just sex but sexual politics" ~ Lyn Gardner, The Guardian