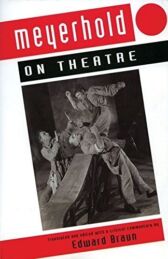 Braun traces the major influences upon Meyerhold during his formative years, moves on to examine his artistic activities in the changing aesthetic, social, and political environment of the day, and in the end stages for us the final personal drama of his life, played out against the Soviet bureaucracy

These writings are supplemented by a critical commentary, relating Meyerhold to his period and containing descriptions based on eye-witness accounts of all his major productions