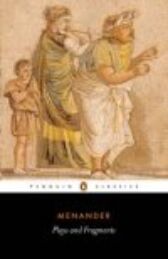 'For what reason, in fact, is it truly worth while for an educated man to go to the theatre, except to enjoy Menander?' - Plutarch To the ancient world Menander (c. 3431-291 BC) was a poet second only to Homer; nowadays, with his tremendous influence on European drama, he provides genuinely interesting theatre

As Greek New Comedy's foremost innovator, he devised the first plays that really concentrate on the lives of ordinary people, polished comedies of manners turning on character and misunderstanding, executed in language that closely reflects the colloquial speech of his time

The unearthing of fragments from Menander has been among this century's most exciting literary discoveries, and scholars are hoping to find more. In the meantime, this Penguin Classic contains all but two of the plays which have survived on papyrus, with a selection of passages attributed to Menander, and a full introduction and notes