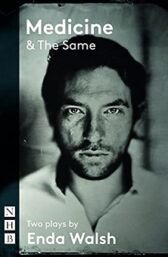 How long have you been here, John?
– I don't know
And what brought you here?
– That's difficult to answer

Enda Walsh's Medicine is a dark and frequently absurdist play

Devastatingly funny and profoundly moving, it examines how, for decades, we have treated those we call 'mentally ill'

It was first produced by Landmark Productions and Galway International Arts Festival as part of the 2021 Edinburgh International Festival, prior to performances in Galway and New York

It was directed by Enda Walsh, with a cast including Clare Barrett, Aoife Duffin and Domhnall Gleeson, with drummer Seán Carpio

This edition also includes Walsh's play The Same, about two women who meet in a psychiatric institution

Published here for the first time, it was produced by Corcadorca in 2017, and won The Irish Times Irish Theatre Award for Best Play.

"Taut and energetic, frequently bleak, but shot through with touches of absurdist humour ... burns with searing honesty ... It's chilling, powerful, and unforgettable" ~ Whatsonstage (on Medicine)

"Takes the stage by storm ... It's bizarre, quite extraordinary and mind-boggling" ~ Broadway Baby (on Medicine)