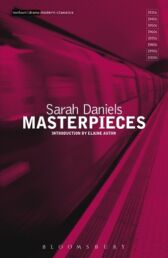 A new edition of Masterpieces ...

This angry and defiant play opens on three couples having dinner in a restaurant, exchanging sexist jokes

The response is varied ...

Some of them laugh uproariously

Some of them uncomfortably

And one is deeply unhappy

"A very powerful evening of theatre . . . Miss Daniels has established herself as a distinct voice with real theatrical flair" ~ Michael Coveney, Financial Times

"Ultimately powerful and deeply disturbing . . . I came out overwhelmed by the sincerity of Sarah Daniels's writing in her play Masterpieces, a play that finally adds up to the most persuasive argument I've heard for banning pornography" ~ Manchester Evening News

"The play has bite, anger and tenacity and many of its arguments are true . . . The supreme merit of Ms Daniels's combative work is that it makes me want to argue back" ~ Michael Billington, Guardian

"A writer with a natural talent for disturbance" ~ Observer