Mastering the Audition - How To Perform Under Pressure 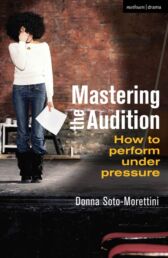 Auditioning is stressful for everyone

The people behind the desk - also under pressure - are looking for a killer audition, yet most auditionees walk into the room feeling nervous, unprepared, and unable to fully control their performance

Drawing on fascinating research into how the brain copes and responds in high-stress situations, Mastering the Audition looks closely at the effects of fear, at our flawed ability to assess or really know ourselves, at what really drives us, and at what it really takes to master the audition experience

Applicable to all areas of performing, including reality television, musicals, stage, film and commercials, this book helps you hone your performing skills and develop the mental toughness that can keep you going through the inevitable ups and downs of the audition process

Other books advise you to 'be confident' and 'be prepared'

This one tells you how

What Can We Know?
Metaphorical Weight Gain and Other Side Effects of Auditioning
The Hard Work of Genius
What's My Motivation?

She has served as Director of Drama for the Royal Scottish Academy of Music and Drama, Head of Acting and Dance for Liverpool Institute for Performing Arts, and Head of Acting at the Central School of Speech and Drama in London

Line? - The Creative Way for Actors to Quickly Memorize Monologues and Dialogues