Mastering Stand-Up - The Complete Guide to Becoming a Successful Comedian 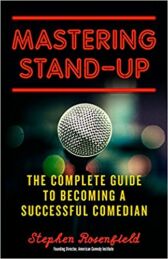 It examines the work of great comedians such as Jerry Seinfeld, Eddie Izzard, Moms Mabley, Hannibal Buress, Sarah Silverman, Richard Pryor, and more as a means of illustrating the most important techniques of performing and writing stand-up

And it lays out a clear plan for achieving success, candidly explaining what works, what doesn't, and why

Including a 12-item "Successful Comedian's To-Do List" Stephen Rosenfield states, "Get undeniably good at each of these and you can kiss your day job good-bye. You will be a pro"

His alumni include some of today's most prominent comedians and comedy writers, such as Lena Dunham, Jim Gaffigan, Eric Slovin, and Jessica Kirson

Rosenfield has directed, coached, and/or written for these and hundreds of other comedians

As a pioneer in the field of teaching comedy, he founded the American Comedy Institute, the premier stand-up comedy school in the United States, in 1989.