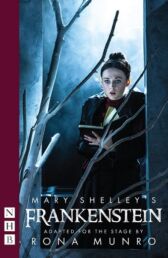 "This story has been told and retold in hundreds of different ways since it was first written. But it remains the dark and rebellious roar of its adolescent author. Mary Shelley was only eighteen when she wrote the novel and she'd already broken every social rule that should have shaped her life. That's the version of Frankenstein I've returned to, the version of the novel" ~ Rona Munro

An eighteen-year-old girl, Mary Shelley, dreams up a monster whose tragic story will capture the imaginations of generations to come

Banished into an indifferent world, Frankenstein's creature desperately seeks out his true identity, but the agony of rejection and a broken promise push him into darkness

Dangerous and vengeful, the creature threatens to obliterate Frankenstein and everyone he loves, in a ferocious and bloodthirsty hunt for his maker

Rona Munro's 'inventive feminist adaptation' of Mary Shelley's Gothic masterpiece places the writer herself amongst the action as she wrestles with her creation and with the stark realities facing revolutionary young women, then and now

'An inventive feminist adaptation... an exploration and celebration of female creativity' ~ The Stage

"By putting Mary onstage at the centre of things rather than a mere framing device, Munro has written something that gets to the heart of the creative process itself'" ~ Herald