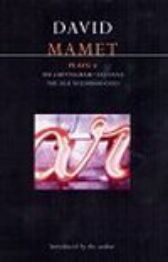 A collection of outstanding plays from one of America's greatest playwrights

Mamet's play suggests that deception is an endless spiralling process that eventually corrodes the soul. But it also harps on a theme that runs right throughout Mamet's work - the notion that we use words as a destructive social camouflage to lie to others and ourselves...

And here through all the repetitions, half sentences and echoing encounter of one question with another, you feel the characters devalue experience through their use of language

As Del cries in desperation at the end, 'If we could speak the truth for one instant, then we would be free' Mamet's point is that we are held spiritually captive by our bluster and evasions" - Michael Billington, The Guardian

Oleanna - "An exploration of male-femal conflicts which cogently demonstrates that whe free thought and dialogue are imperilled, nobody wins"- Independent

David Mamet was born in Chicago in 1947. He studied at Goddard College, Vermont - later becoming Artist in Residence - and at the Neighborhood Playhouse School of Theatre in New York

His first and many subsequent plays were first performed by the St Nicholas Theatre company, Chicago, of which he was a founding member and Artistic Director. In 1978 he became Associate Artistic Director of the Goodman Theatre, Chicago, where American Buffalo had been first staged in 1975, subsequently winning an Obie Award and opening on Broadway in 1977 and at the National Theatre in 1978

His greatest hits, Glengarry Glen Ross and Oleanna followed in 1983 and 1993 respectively