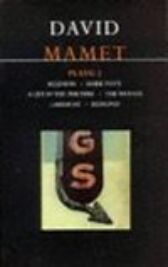 "It would be hard to over-praise the way Mr Mamet suggests behind the probing, joshing family chat, an extraordinary sense of pain and loss...although the play has a strong social comment about the destructively cyclical effect of divorce, it is neither sour nor defeatist" ~ Guardian

In Dark Play, a father tells his five-year-old daughter a story about an Indian boy and his pony "a subtle, lyrical, dreamlike vignette" ~ Star Tribune

In The Woods, a young man and woman spend the night in a cabin together "a beautifully conceived love story" ~ Chicago Daily News

Edmond is an odyssey through the disturbing, suspended dark void of a contemporary New York "it is also a technically adventurous piece pared brilliantly to the bone, highly theatrical in its scenic elisions" ~ Financial Times