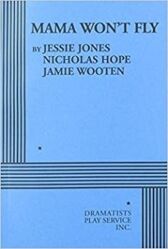 With only four days to make it to the ceremony, this determined daughter has no choice but to drive cross-country with her equally willful mother, Norleen Sprunt, in Mama’s vintage sedan

As Savannah steels herself for this hastily conceived road trip, another outrageous complication arises - the bubbly, over-eager bride-to-be arrives unannounced

Hayley Quinn, delighted to finally meet her future in-laws, is convinced that travelling together to her wedding is the perfect way to bond

Every conceivable - and inconceivable - mishap that can occur does, including the theft of their car and all their clothes, a near-fatal encounter at an underwear museum, the accidental homicide of an ancient Texas relative, a mad dash across the desert in a hijacked eighteen-wheeler and a riotous detour to Vegas that ends in a brawl with an ordained showgirl/minister

As the misadventures multiply, the beleaguered trio rapidly develops the urge to ditch each other anywhere along the way

Rising above their age-old mother-daughter issues, Norleen and Savannah work together to get the nuptials back on track

In a surprising and heartwarming resolution, they forge an exciting new path for their own relationship and welcome Hayley into their delightfully wacky family

This ferociously funny, family-friendly Jones-Hope-Wooten comedy will have you laughing your way across the country and all the way down the aisle!