Lysistrata and Other Plays - The Acharnians & The Clouds 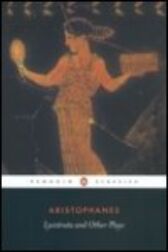 "But he who would provoke me should remember. That those who rifle wasps' nests will be stung!

Writing at a time of political and social crisis in Athens, Aristophanes (c.447c.385 BC) was an eloquent, yet bawdy, challenger to the demagogue and the sophist. In Lysistrata and The Acharnians, two pleas for an end to the long war between Athens and Sparta, a band of women and a lone peasant respectively defeat the political establishment

The darker comedy of The Clouds satirizes Athenian philosophers, Socrates in particular, and reflects the uncertainties of a generation in which all traditional religious and ethical beliefs were being challenged

For this edition Alan Sommerstein has completely revised his translation of these three plays, bringing out the full nuances of Aristophanes' ribald humour and intricate word play, with a new introduction explaining the historical and cultural background to the plays