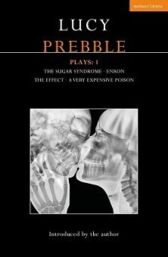 This eagerly anticipated play collection brings together her landmark plays for the first time, showcasing her work from 2003 to 2019

Beginning with her George Devine Award-winning play The Sugar Syndrome it continues through her explosive look at the biggest financial scandal in history, concluding with her pointed dramatization of the one of the most shocking news stories of the 2010s

The Sugar Syndrome (2003) Dani is on a mission. She's just 17, hates her parents, skives college and prefers life in the chatrooms. What she's looking for is someone honest and direct. Instead she finds Tim, a man twice her age, who thinks she is 11 and a boy. What seems at first to be a case of crossed wires, ends up as an unlikely, and unsettling friendship between the two, which culminates in a shocking, and morally challenging revelation.

Enron (2009) One of the most infamous scandals in financial history became a theatrical epic in Enron, a dazzling exposition of the shadowy mechanisms of economic deceit. Mixing classical tragedy with savage comedy and surreal metaphor, Enron follows a group of flawed men and women in a narrative of greed and loss which reviews the tumultuous 1990s, and the financial chaos which has spilled over into the new century.

The Effect (2012) a clinical romance. Two young volunteers, Tristan and Connie, agree to take part in a clinical drug trial. Succumbing to the gravitational pull of attraction and love, however, Tristan and Connie manage to throw the trial off course, much to the frustration of the clinicians involved.

A Very Expensive Poison (2019) A shocking assassination in the heart of London. In a bizarre mix of high-stakes global politics and radioactive villainy, a man pays with his life. At this time of global crises and a looming new Cold War, A Very Expensive Poison sends us careering through the shadowy world of international espionage from Moscow to Mayfair.

“A playwright blessed with an exceptionally fine mind” – Telegraph

“Prebble has written a profound and stirring play. The material is complex but always accessible, the drama serious and informative yet deeply human, with the odd jolt of piercing humour. The Effect confirms her as one of the most intelligent voices in British theatre.” – Evening Standard (on The Effect)