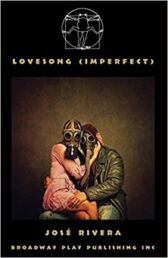 In Lovesong (Imperfect), death has been declared illegal by the US government, trees grow lights instead of leaves, and ghosts love the living

There, two foolhardy lovers search for a love that lasts forever

“Lovesong (Imperfect) by José Rivera was a beautiful and clever tribute to love and lust in a world where death has been outlawed … The writing is executed beautifully, dancing elegantly between sincerity and humor … Each character struggles with possession and the theme of only wanting what you cannot have, grieving what is lost when committing, and longing

The build throughout the play of constant frustration and longing makes the final scene so touching and a complete emotional release for the audience. The burst of color, the dance between Delilah and Venezio as they find one another and truly see each other for the first time was such a beautiful sentiment …

The couple keeps coming back together despite their differences and they learn to be playful and free like they were when they were children and this conclusion is so uplifting. Lovesong is a journey through love, touching on its ugly desperation and its childish nature, it gently teases humanity’s inability to learn from our own mistakes, especially that of communication between men and women

There is a subtle commentary on the flakiness of the government as they change the laws on the legality of death and spirituality over and over during the play, each time signified by a newspaper comically flying through the air and landing in a players hands. This comedic look at love and death is a glorious journey, and will be appreciated by theatre companies for years to come” ~ Zara Zeidman, Outer-Stage