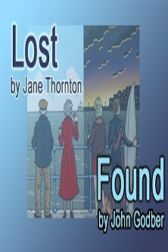 Both Jane Thornton's LOST and John Godber's FOUND are included in this volume and both are set at the sea-side ...

They love their work they could watch it all day

So when the septuagenarian Palm Court Boys band are delayed, Tom and Chelsea must fill the entertainment slot with their take on Len and Betty's tribulations

It's the last night of the summer season, Tom and Chelsea's holiday jobs are now a distant memory

There'll be no more nights on the town, beer at the beach huts and surfing on the sea, as he goes back to university and she's headed for the dole

The summer season at the Court Hotel may have brought them together, but will fate pull them apart in this funny, sharp and biting modern comedy?