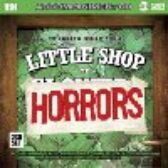 Inspired by the low-budget 1960 black comedy film directed by Roger Corman, the 1982 musical ran for 2,209 performances and a film version made in 1986 became a cult classic

The music is in the style of early 1960s rock and roll, doo-wop and early Motown, includes several show-stoppers including "Skid Row (Downtown)", "Somewhere That's Green", and "Suddenly, Seymour", as well as the title song

Call Back in the Morning

The Meek Shall Inherit