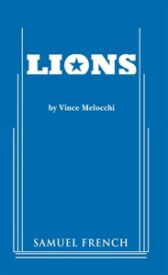 But unfortunately out-of-work steelworker John Waite is not

With humor and humanity, we're given a glimpse into The Tenth Ward Club, where the patrons place their hopes on their team, and attempt to escape the creeping demise of their city and of their way of life

John "Spook" Waite - late-forties. John's a long suffering Detroit Lions fan. A lifetime employee of the Elias Metal plant, he has been unemployed since they left town a year ago. Possessing an expert football knowledge, he is haunted by opportunities he passed up in his younger days

Beth Waite - John's wife. In her mid forties, she works at the local "dollar store" trying to keep things together at the Waite home. These days, she carries the weight of the world on her shoulders

Andy Guerall - early-thirties. After the factory closed, he went back to college and now tends bar part time at the Tenth ward club

Bill "Housepie" Folino - late-fifties. Long time member of the club. A semi-retired man with a heart of gold

Reverend Russell Stuvants - African American man in his early-fifties. "Rev" is a good natured, caring man of the cloth who helps the members of the club keep a positive outlook.

Larry Gerber - late-forties. A long time member, owns the pizza shop next door to the club.

Gail Finch - mid-forties. A wise-cracking waitress at the local diner. A Green Bay Packers fan, she nevertheless fits right in with the group

Curtis Benton - African American man in his late twenties. A frustrated bagger at the local grocery store, he dreams to see the world, but held captive by his fears

Jerry "Lennie" Lenhart - a salty bartender with a hard exterior, and a bit of a blow hard

Artie Piro - twenty-four, a childhood friend of John Waite. Appears only in memory

Mabel Johnson - late-forties. An understanding and sympathetic African American woman, she works as a job placement counselor in downtown Detroit

Man (aka Chicago) - a Chicago Bears fan visiting the Detroit area, he mistakenly stumbles into the Club to watch the NFL draft, unaware that it is a "club", not a bar

" ... a drama that speaks directly to our country's current state of affairs, which is to say it's a play about unemployment, hardship and economic collapse. If that sounds like a depressing thematic lineup, the play itself is far from being a downer. Lions takes an unsentimental look at a ravaged cross-section of present-day Detroit and tells a story of compassion in a cold climate" ~ Los Angeles Times

"Lionsis about hope ... about the endurance of a middle class getting squeezed ... finding life amid the lifeless" ~ Drew Sharp, Detroit Free Press

"... an all-around touching portrait of Middle America, a reminder that 'real Americans' need not be so reductively characterized as Joe the Plumber" ~ L.A. Weekly