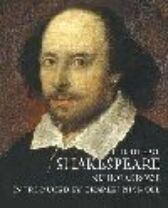 This rare text is the first ever biography of Shakespeare, written by one of the liveliest dramatists and poets of the early 18th century

A landmark in our understanding of the man and his work, it's re-published here for the first time in its original form, and is introduced by one of the most original biographers of our own time, and richly illustrated with contemporary images

Nicholas Rowe's Some Account of the Life &c. of Mr. William Shakespear, was published in 1709 as the preface to his pioneering edition of the plays

Rowe, together with Thomas Betterton, the greatest actor of the period, carried out archival research and interviewed widely to collect as much reliable information about Shakespeare as they could

Rowe's edition of the plays was also the first to be illustrated. This edition has 25 pages of these fascinating early images, mostly based on contemporary performance: a unique and charming picture of Shakespeare in performance

The edition is introduced by Charles Nicholl, who places this fascinating text in its time, and reads it with the insight of a fellow sleuth into the world of the Globe and its dramatist

Nicholas Rowe (1674-1718) was the author of a number of successful tragedies, a great translation of Lucan's Pharsalia, and the first modern edition of Shakespeare. He was appointed Poet Laureate in 1715

Charles Nicholl is the author of several biographical studies of Shakespeare and his contemporaries, including The Lodger, about Shakespeare's life in Jacobean Cripplegate; A Cup of News, about the pamphleteer Thomas Nashe; and an acclaimed investigation into the death of Christopher Marlowe, The Reckoning. His many awards include the Hawthornden Prize and the James Tait Black Prize for Biography