Lend Me A Tenor and Other Plays 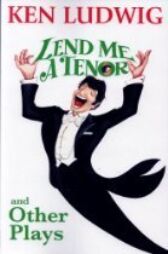 Four great titles in one volume ...

In Lend Me a Tenor, world famous tenor Tito Morelli is to perform Otello, his greatest role, at the gala season opener

But Morelli is late

Through a hilarious series of mishaps, Il Stupendo is given a double dose of tranquilizers which mix with the booze he has consumed and he passes out

Max is an aspiring singer and Saunders persuades him to get into Morelli's Otello costume and try to fool the audience into thinking he's Il Stupendo ...

Shakespeare in Hollywood is about falling in love and dreaming, myth and magic

"Shakespeare in Hollywood is so deliciously inventive, you'd swear Ludwig and the Bard were in cahoots. At once poignant and funny, literary and farcical, sophisticated and silly, political and fanciful, high-brow ... a delight!" ~ The Baltimore Sun