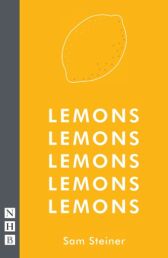 But what if there were a limit?

Oliver and Bernadette are about to find out

It's about what we say and how we say it

About the things we can only hear in the silence

The play premiered at Warwick Arts Centre in 2015 and won three Judges' Awards at the National Student Drama Festival, before appearing at Latitude Festival, the Edinburgh Festival Fringe and Camden People's Theatre, London

" bright, light and sharp - a rom-com with smarts" ~ WhatsOnStage