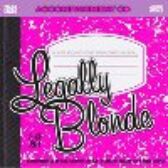 Already a popular film, Legally Blonde moved from screen to stage in late 2006 when it debuted on Broadway

With music and lyrics by Laurence O'Keefe and Nell Benjamin, the show received seven Tony nominations, including one for Best Score

Blood in the Water

Chip on my Shoulder

Vocal Selections can be purchased separately by clicking here