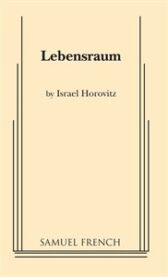 Using a cast of three to play 40 sharply drawn characters, this bold work of penetrating intelligence is based on the fanciful, explosive idea that a German Chancellor might, as an act of redemption, invite six million Jews to Germany and promise them citizenship and jobs

A resulting scenario unfolds that explores the effects of the policy on Jews and Gentiles with widely varying outlooks: an out of work Jewish dock worker from Massachusetts who brings his Irish wife and his son to Bremerhaven to start a new life, a survivor of Auschwitz who returns to find the woman who betrayed his family to the Nazis, a young German smitten by a Jewish American teenage girl, an unemployed German laborer and scores of others

The actors make quicksilver changes from one character to the next, occasionally using masks or character cut outs to enhance the transformations