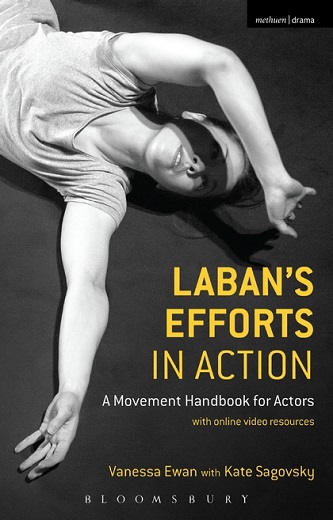 Large Mixed Cast
This book outlines Vanessa Ewan's practical process, which allows the actor to understand their own movement and that of others by exploring one key part of Laban's work: the 'Efforts of Action Drive'

As an actor, awareness of your movement is the key to transformation

By making deliberate physical choices, you can fully and articulately embody different ways of being and thereby become someone or something else

Working with them helps the actor to create wholly present and physically ambitious performances.

This complete, stage-by-stage, working process has been developed through more than thirty years of work with actors in the studio

Clear instructions for practical exercises are woven throughout the book, as well as exciting ways to apply the work in rehearsal, performance and on set

And full online video and audio resources allow the reader to experience the practical work in action.

Part A: THE BIGGER PICTURE

CHAPTER ONE: MOVEMENT AND THE ACTOR

What is Movement?
What is Effort?
What is Action?
Laban's Efforts and the Actor

The Body in Space
Basic Locomotion
The Body as Orchestra

CHAPTER FIVE: ABOUT THE PROCESS

CHAPTER SIX (a): THE PROCESS WITH FLOATING

CHAPTER SIX (b): THE OTHER SEVEN EFFORTS

Part D: THE EFFORTS AT PLAY

APPENDIX A: NOTES ON PROCESS

APPENDIX B: A NOTE ON WORD CHOICES

APPENDIX C: FOCUSING THE WORK FOR THE ACTOR

"Vanessa Ewan's work with Laban and the Efforts, as you will find in this inspired book, provides performers with an incredibly fertile foundation from which to create. She has found an astoundingly practical way of applying Laban's work to the quest of being a fully embodied actor. You will find tools in this book that will open door after door to your own creativity and awaken you to the endless possibility of what you can create on stage and on screen" ~ Andrew Garfield, actor

"This is a fresh and invigorating new addition to the Laban for Actors family of publications. It's just like being in the studio with Vanessa - with practical how-to exercises and guided explorations in Effort, this book will be invaluable for all actors and teachers of movement for actors" ~ Juliet Chambers, Guildford School of Acting/University of Surrey, UK