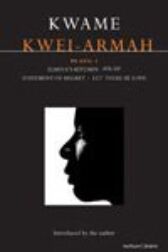 This collection of his work includes his trilogy of plays commissioned and produced by the National Theatre between 2003 and 2008, and Let There Be Love, first produced at the Tricycle Theatre, London, in 2008

Elmina's Kitchen won him awards for most promising new playwright and was described as " ... a scorching drama about the black experience in Britain's inner cities ... there is no mistaking its raw power, humanity and urgent concern" ~ Daily Telegraph

Fix Up explores race and cultural roots and heritage with verve and wit, setting heritage against the inexorable march of time and change

The final play, Let There Be Love is described by the Evening Standard as " ... a smart and possibly noble exploration of what it takes to be human and happy"