Kiss of the Spider Woman 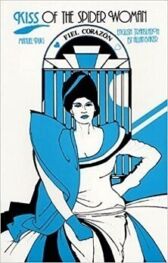 Two prisoners share a cell in an Argentinian jail

Valentin, a young Marxist revolutionary, is contemptuous of the older Molina who is gay, yet a deep friendship develops

But the guards are bribing Molina with the promise of an early release if he can get his cellmate to talk...

First performed at the Bush Theatre, London in 1985 starring Simon Callow and Mark Rylance, it went on to become a major film, starring William Hurt, and also a musical