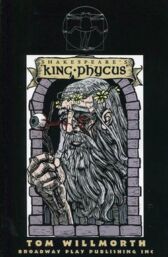 The storyline combines such Shakespearean works as King Lear, Hamlet, Richard III, Romeo and Juliet and Julius Caesar into a new 'found' play that is full of terrific wordplay, double entendres and stage combat skillfully spooking and referencing the original source material to exude humor

Belly laughs abound from the six players, so join us, merry makers, for a play so grotesque with tragedy that it features thirty one characters in forty settings, spanning thousands of miles and hundreds of years

"What I think is so wonderful about King Phycus is not only that it's a full-length play in iambic pentameter that refers to absolutely every Shakespeare play down to Titus Andronicus, but that it demonstrates that Shakespeare is a lot clearer, a lot funnier, a lot more alive than lots of people are taught. This is not theater that is good for you - this is theater that is hilariously funny. It is spectacularly good!" ~ Kelly Keiman, W B E Z Radio