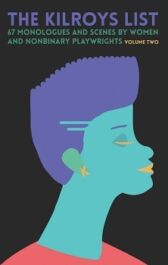 In 2014, they released their first annual List - a vetted collection of plays written by women, trans, and nonbinary writers, nominated by hundreds of professional artistic directors, literary managers, professors, directors, and dramaturgs

Following the success of Volume ONE, The Kilroys are now back with Volume TWO, a new collection of 67 monologues and scenes by women and nonbinary playwrights

"When I look at the list of women and nonbinary writers included in this volume, many of whom I have mentored or taught, it is a beautiful reminder that we are a community to be reckoned with, and that there is an abundance of vital narratives awaiting a larger audience. While there remains a great deal of work to be done to reach racial and gender equity in the theater, the powerful and provocative writing presented here is part of the inciting incident that will no doubt shake up the status quo" ~ Lynn Nottage, from her Foreword

"This is a historic compilation of fervent, fierce and formidable voices, who have been left on the margins for far too long, but who now, with the caliber of their writing, stake claim to what it means to be an American Playwright, in this time and place" ~Tanya Saracho

"Too often women and trans writers get overlooked and underproduced, and this anthology is just one way we’re hoping to change this. These monologues show a fraction of the underrepresented and underserved voices in the American theater. Read these monologues, support these playwrights’ careers and productions―and help make our homogeneous playing field look a little more like our America" ~ Zakiyyah Alexander