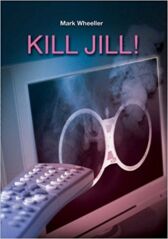 Mix these together to create Kill Jill which explores the topical issues of homeowners defending themselves, and asks how far can Reality TV be allowed to go?

This One-Act Play uses ideas from the age-old story of Jack And The Beanstalk, where a youth, Jack, has been repeatedly robbing the guy at the top of the beanstalk

Firstly, with Jack, is his girlfriend, Jill, (of course) who is co-incidentally the latest victim in Reality Lottery, a fictional TV transmission where people are forced to participate in a Reality Show, a futuristic form of National Service

Secondly, the guy at the top of the beanstalk has chosen this day to lay in wait for the young thieves armed with a shotgun

And the ending is Tarantinoesque

"What a great script! Powerful stuff Mark! At times the dialogue's quite surreal and the build up of tension in the visit to George 's castle and the scene between Jill and George put the play in firm thriller territory! The playfulness with style and wide range of reference points all make it a clear continuation of your 'anytime, anyplace, anywhere' theatrical freedom . Kill Jill is a very fizzy ride!" ~ Paul Mills Head of Drama, Westgate School, Winchester