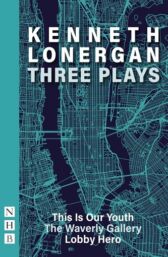 Described by the Wall Street Journal as "America's greatest living playwright", Kenneth Lonergan is internationally acclaimed for his trademark humour and his genius for capturing the heart and soul of human interactions

This volume gathers together three of his landmark plays ...

This Is Our Youth (1996) is a wildly funny, bittersweet and lacerating look at three days in the lives of three affluent young Manhattanites in the 1980s

The Waverly Gallery (1999) is a poignant, generous and frequently hilarious play about a feisty grandmother's last battle against Alzheimer's disease

A finalist for the 2001 Pulitzer Prize for Drama, this captures the humour and strength of a family in the face of crisis

But working in a lobby proves to be no sanctuary from the world, as he is unwittingly drawn into a murder investigation

Kenneth Lonergan is an American film director, playwright and screenwriter

He wrote and directed the films You Can Count On Me, Margaret and Manchester by the Sea, for which he won the 2017 Academy Award for Best Original Screenplay

This collection also features an exclusive Introduction by the author

"Lonergan's ear for the crosscurrents of love and recrimination, of accusation and confession, is as fine as that of any American dramatist" ~ Washington Post