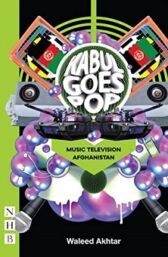 But when their show starts to make waves, the two young friends must take on repressive forces to build a new Afghanistan

Inspired by the true story of Afghanistan's first youth music programme, Kabul Goes Pop: Music Television Afghanistan explores a world following the US invasion that is complex, contradictory and shocking – all to a soundtrack of early noughties' pop

"[Akhtar has written] an elegantly written, often very funny, piece that works precisely because it takes a moral position on Afghanistan, and, underlying every word, there is a raw and admirable fury ~ The New European