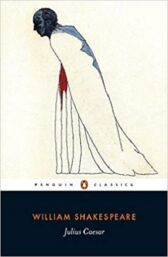 Set at the birth of the Roman Empire, William Shakespeare's Julius Caesar is a taut historical drama exploring the violent consequences of betrayal and murder

This Penguin Shakespeare edition is edited by Norman Sanders with an introduction by Martin Wiggins.

'Friends, Romans, countrymen, lend me your ears;
I come to bury Caesar, not to praise him'

When it seems that Julius Caesar may assume supreme power, a plot to destroy him is hatched by the senators Brutus and Cassius, who are determined to preserve the threatened Republic

Seizing his opportunity, the ambitious young Mark Antony turns public opinion against the conspirators, plunging the nation into a bloody civil war

This Edition includes a general introduction to Shakespeare's life and Elizabethan theatre, a separate introduction to Julius Caesar, a chronology, suggestions for further reading, an essay discussing performance options on both stage and screen, and a commentary