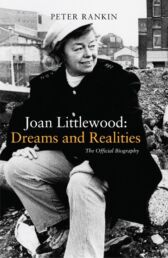 'My only gift is to grow a show,' said Joan Littlewood, annoyed by what she had not achieved

Even so, her ability to do just that put her and her company Theatre Workshop head and shoulders above mid twentieth-century theatre

In the year when she would have been a hundred, which includes three revivals and a commemorative stamp, Peter Rankin, who worked with Joan for 38 years and in whose flat she died, takes the papers she left him and goes back to the beginning

As she told him, 'You know me better than I know myself'

Drawing on Littlewood's personal archive, Dreams and Realities observes at close hand one of the most influential theatre makers of the twentieth century

"One of two undoubted geniuses of the post-war British theatre, the other being Peter Brook" ~ Sir Peter Hall

"The most galvanising director in mid-20th century Britain" ~ Peter Brook

"Joan Littlewood brought theatre to the people of east London and revolutionised the international theatre landscape with her bold and powerful productions. She was an inspiration to many and it's important that we recognise the significance of her work ... " ~ Kerry Michael, Artistic Director, Theatre Royal Stratford East

"Devastatingly well-informed ... The book's an utter treat, revisiting Joan's Book ... but telling the whole story, too, from cradle to grave, from Manchester Rep to Stratford East and beyond, her ideals, her passion, her fire, fury and failures in all their kick-ass splendour" ~ Michael Coveney, What's On Stage