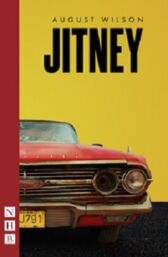 Jitney received its British premiere at the National Theatre in 2001, when it won the Olivier Award for Best New Play

"Jitney, a masterful and garrulous piece of naturalism, is a play of rending and mending, an exploration of how we rip apart ourselves, each other, the fabric of a city, and how we might then go about patching what we have torn" ~ Guardian