James IV - Queen of the Fight 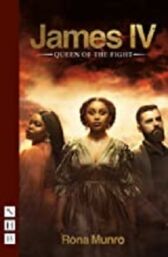 Scotland, 1504, seen through the eyes of new arrivals Ellen and Anne, two Moorish women who have to fight to find and keep a place in the dazzling, dangerous world of the Scottish court of King James IV

It's a world where war is never far away, words of love and promises are not what they seem, and where poets might turn out to be more dangerous than any assassin

James IV follows the spectacular success of Munro's The James Plays about James I, II and III, which were first performed by National Theatre of Scotland, transferred to the National Theatre, London, and named Best New Play at the Evening Standard Awards in 2014

" Fluid and forthright" ~ The Guardian

"Smoothly slides from epic to intimate" ~ The Stage

"Beautiful and intense" ~ The Scotsman