Jack the Ripper - Monster of Whitechapel 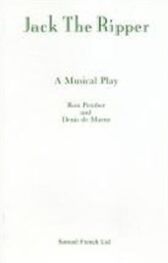 Many of the characters and events are taken from history, but others are pure comic invention

Such as Pegeen Macdougal, a practitioner of white magic, and her "familiar" Hogarth, who speaks only in cookbook terms

As Pegeen says, "I been teachin' him to read. Only book I got is a cookbook"

All of the roles are amusingly drawn, from the frustrated physician, Dr. Forbes Winslow, already henpecked by his fiancé, suffragette Ernestine Pankhurst, to manservant Phillip Poole, who is bound and determined to solve the murders in the style of his hero, Sherlock Holmes

There are several murders, but these are given a wickedly humorous touch - by the victims themselves!

Jack's reign of terror has begun, and Sir Charles Warren, a totally inept British Lord, has been appointed Commissioner of Police to apprehend him

Four women are murdered, and the play revolves around the attempts to save the fifth - Angela Ellison, a reformed girl of the streets - who is the last required to complete Jack's evil ritual

Jack's identity is not revealed until the end, and the author has provided three alternate endings, each with a different character exposed as "Jack"

So - should the director have a fiendish streak - the ending could even be selected by pulling straws to keep everyone (including the cast!) guessing until the final scene