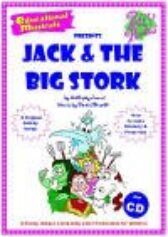 Young Jack is a useless farmer and an awful singer

His long-suffering mother finally has enough when he ruins the harvest, threatening both their farm and their village with starvation

As a last resort, to the consternation of both Jack's sister and his girlfriend, Mary Milkmaid, she sends him to market to sell their trusty, milk cow, Esmeralda

At the market Jack meets the evil Witch Watt who dupes him into parting with Esmeralda for a strange, egg shaped, magic bean

But this magic bean is not a beanstalk