Inventing the Truth - Devising and Directing for the Theatre 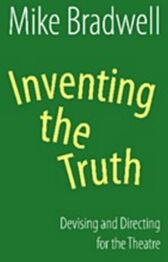 NB : To aid the reader's understanding of this process, included in the book are the full texts of Mike Bradwell's play A Bed of Roses and Jack Thorne's When You Cure Me

Using A Bed of Roses as an example, Bradwell shows how the actors set about inventing their characters, whether within a pre-determined framework or with no strictures whatsoever

He explores how actors can then 'grow' their character, both through solo work and through interaction with the other characters

He also examines the role of the director in moulding and shaping the individual scenes, the overall action of the play, and the development of the characters within it

Taking as his template Jack Thorne's play When You Cure Me, he demonstrates the meticulous work on the text that is needed to keep the characters alive and truthful in every moment of the action

All together, Inventing the Truth offers practitioners a unique account of the techniques involved in devising or directing plays to the highest standard

"There is a special sense of care about a Mike Bradwell production, in dramas that penetrate deeply into the secret corners of the human heart" ~ Daily Telegraph